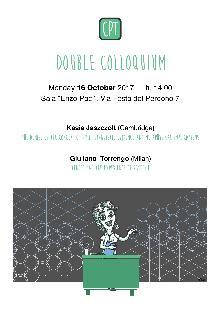 14:00-15:00 Kasia Jaszczolt – “The Demise of the Concept of Time: Linguistic Evidence and Metaphysical Implications”

The Demise of the Concept of Time: Linguistic Evidence and Metaphysical Implications

Investigation into the reality of time can be pursued within the ontological domain or it can also span human thought and natural language. I propose to approach time by correlating three domains of enquiry: into metaphysical time (M), the human concept of time (E), and temporal reference in natural language (L), entertaining the possibility of what I call a ‘horizontal reduction’ (L>E>M) and ‘vertical reduction’ (through modal supervenience; Jaszczolt 2009, 2017a,b). I present my theory of temporalityL/E as epistemic modality, drawing on evidence from the L domain and its correlates in the E and M domains. On this view, the human concept of time is a complex, ‘molecular’ concept and can be broken down into primitive concepts that are modal in nature. Put simply, on the level of the conceptual building blocks, the concept of time features as degrees of epistemic commitment to representations of states of affairs. I present some evidence from tensed and tenseless languages in support of this modal view (endorsing the L>E path) and point out its compatibility with the view of real time as metaphysical modality (endorsing the E>M path). Next, I move to the topic of the passage of time and the subjective ‘feeling of the rate of the passage of time’ and show how they can be accounted for in my modal reductionist view. I conclude by speculating on the challenges for a reductionist perspective of this kind and remark on the place for A-theoretic concepts in this essentially B-theoretic view (McTaggart 1908).

Tenses and the Experience of Passage

We live in a present that constantly shifts towards the future and recedes away from the past. This seems to be the reason why we belief that time passes or flow. But what is the experiential base of such a belief? Is it a feature of our occurrent mental episodes, or it is merely a feature of our common sense narrative about reality?
In the recent literature, we can distinguish various approaches to this central problem in philosophy of time. Naive representationalists believe that the feeling of the passage of time is a “worldly” representational feature of the content of our experience, like being red or yellow (Craig 2000. See Prosser 2016 for a detailed critique). Sophisticated representationalist construes the feeling of time passing as the phenomenal character that our experiences have in virtue of representing things from the perspective of the present – that is, in virtue of representing things in a tensed way (Almäng 2014). Reductionists take the experiences of change and motion to be in some sense responsible for our sensation of passage (Paul 2010, Dainton 2008, Deng 2013). Deflationists maintain that there is no distinctive phenomenological character of the passage, but only an intuitive grasp of the ordinary belief that time passes (Hoerl 2013, Hugget 2014). Non-representationalists consider the feeling of time passing as a intrinsic feature of the experience itself, rather than the represented content (Torrengo 2017).
In this paper, I will focus on the interconnection between three elements: (i) the dynamic aspect of our experience (as opposed to the reality of the passage of time), (ii) the “tensedness” of our mental attitudes such as beliefs and desires, and the role of both in (iii) motivating action. The notion of tense as applied to linguistic content is familiar from the semantic treatment of indexical, and more generally “perspectival” elements in natural languages (See Dyke 2013, and Jaszczolt 2009 and Jaszczolt 2017). It has also been exploited to model elements of the content of beliefs and other mental attitudes, and the representational content of experience. As an element of a linguistic representation, it is typically understood as what is responsible for the perspectival way in which the information about the temporal dimension is conveyed. As an (alleged) element of experiential content, it is naturally connected to our feeling of passage. Their status as feature of propositional attitudes is somehow unclear, and seems to require perspectival and dynamic element together.
I will argue that this unclarity comes from the failure to see that tenses cannot be the explanatorily ground of the feeling of passage of time. It is rather the feeling of passage (understood in non-representational terms) to give raise to beliefs with a tensed content. My main point will be that in such a framework we can acquire a deeper understanding of the link between tensed beliefs and timely action (Torre 2009, Perry 2013).