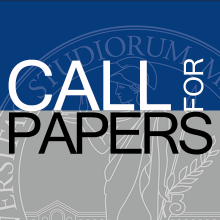 We are pleased to announce the new Graduate Conference of the Doctoral School in Philosophy and Human Sciences:

Converging Dichotomies. An interdisciplinary approach to Nature and Culture

The notions of Nature and Culture may appear as essentially independent the one from the other for their literal definition. Indeed, it is considered one of the traditional dichotomies in Western thought: Nature seems to be an extrinsic dimension of Culture due to the absence of artificiality and development, which seems rather to belong to the latter.

Nevertheless, there have been important philosophical and scientific considerations that have structurally based their theoretical proposition on the close relationship, often dialectical, between the endless change of Nature and the becoming of Culture.

Consequently, the goal of the conference will be to provide an interdisciplinary debate through specific cases studies in the panorama of Human Sciences. Every session will be introduced by a remarkable keynote speech assessing a theoretical framework necessary for a broader contextualization of every case study.

Authors are invited to produce contributions on this topic particularly addressed to one of the following sessions.

Nature and culture were among the central issues debated in philosophy from the early Greek thinkers to contemporary reflections.

We are interested in investigating the various manners in which the nature-culture contrast is assessed in the history of thought. This interrogative leaves room open for a large number of approaches and can be addressed within several different branches of philosophy, such as ethics, politics, theology, epistemology, physics and metaphysics. It can also be related to other disciplines in the humanities, such as history, science and literature. For these reasons, we hope to welcome PhD students and junior academics throughout the humanities and thus create an interdisciplinary dialogue across various fields in the study of classical antiquity and beyond.

Our main purpose is to examine how philosophers interpreted and assessed the concepts of nature and culture in a wide variety of contexts, including but without being restricted to:

The nature/culture dichotomy has been the object of constant criticism over the past decades, because of the limits of these concepts in explaining human representations and practices. Considering the positions of Philippe Descola, Eduardo Viveiros de Castro and Tim Ingold, anthropology has focused on the nature of human being and his own place in a close relationship to non-human being life forms. In their studies, these scholars have highlighted how climate phenomena and local species biodiversity get involved in a complex social and cultural relationship with the human communities. Following these ethnographical perspectives, Nature and Culture dichotomy proves itself to be meaningless: human communities are complex networks where men are constantly connected not only with human but also non-human actors. Moreover, as Bruno Latour argued, these networks involve tools, technological devices and ideology. Therefore, the identity of a human being does not presuppose a natural order existing independently from and externally to a cultural order.

From this anthropological perspective, the natural world could be inquired beyond the traditional epistemological classification in which human and natural sciences don't share a common ground of analysis. What principles must guide this kind of research? What methodologies should ethnologists apply? Which concepts can render their results intelligible?

We are interested in contributions related mainly, but not exclusively, on the following issues:

Following postmodernity and the crisis of the great narratives, Nature and Culture have to be reconceptualized in a form of a new dialogical relationship. In this sense, the rise of the new concept of the Anthropocene represents the public death of the modern understanding of nature removed from society (Lorimer, 2012). Indeed a vision of Nature as an independent entity from Culture and man is no longer sustainable.

In a geographical perspective, the dichotomy between Nature and Culture has never been so strict and it has always been related with man and the way he managed to live in his own environment. These two subjects set the foundation of the whole discipline; Geography in its diachronic evolution has adopted an array of different standpoints, ranging from the early environmentalist theories to humanistic perspectives. What has always remained constant is the interpretation of the relationship, which has always been conceived as a dialogical system instead of a dichotomic one.

Recently, the environment seems to have acquired a more significant role, due to the wide group of phenomena known as Global Change. Thus, in this new era of Anthropocene, feedback reactions to the initial input given by human activities are forcing humanity to a deep reconsideration of its behavior toward the environment. The result is a new balance in the dialogical relationship, where Culture could be seen as the main engine that moves the adaptation processes providing local answers to global issues.

That being said, new fields of research can arise. How are different communities - in different geographic regions - dealing with ecosystem changes, land loss and resource exploitation? What consequences could be involved for cultural identity, territorialization and the very sense of place? Finally, how these particular examples translate to the global scale?

The aim of the session is to explore this new balance throughout specific case studies and to provide interdisciplinary debate through specific cases studies in the panorama of Human and Environmental Geography. We invite authors to submit abstracts for oral presentation in the following topics:

The language of the conference is only English.

We accept extended abstracts that should be prepared for a blind review in a PDF format before March 3rd (Extended Deadline).

We ask two files: in the first one, the candidate is supposed to write the proposal and in the second one, we would need the following details: name, institutional affiliation, contactinformation.

We invite proposals from graduate students and early career researchers within three years of completion of their degree for papers of approximately 2500 characters including bibliography. Please write ‘Milan PhD Conference Abstract Submission’ in the subject line of your email as well as the year in which the PhD was awarded in the case of early career researchers. Abstracts should be prepared for blind review, so ensure that your abstract is free from any identifying personal details.

Please, submit your proposals to: converging.dichotomies2017@gmail.com

The acceptance notification will be given no later than March 7th.

Participation at the conference is free of charge.

Meals will be provided for the length of the conference.