4 ottobre 2016: Fregean Issues in Philosophy of Mathematics and Logics 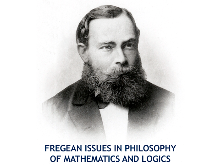 Fregean Issues in Philosophy of Mathematics and Logics

10.45 Francesca Boccuni – Arithmetic on the Cheap

Foundational projects for mathematics disagree on whether pure and applied mathematics should be explained in one single step. Among proponents of unified accounts, neo-logicists fostered discussion of the principle known as Frege’s Constraint (FC), demanding a general explanation of applicability to be provided in the definitions of core mathematical concepts. The present aim is to reevaluate the philosophical import of FC against common understandings of it. After rehearsing the purposes it may be endorsed for, I contend that its usual reading is biased by questionable ontological assumptions. I explore weaker variants – a Moderate and a Modest FC – delivering more reasonable constraints. Contrary to neo-logicist and structuralist expectations, (ante rem) structuralism (and other, even nominalist) views can meet both constraints. I dispel doubts that Moderate and Modest FC are too weak, showing that they still assuage Frege’s original concerns on applicability, and they also subserve neo-logicist preoccupations by dismissing so-called “arrogant” definitions. As a result, a better understanding of the philosophical significance of FC for both Fregean and non-Fregean philosophies of mathematics is advanced.

Francesca Boccuni
Arithmetic on the Cheap

The so-called Scottish neo-Logicist school (championed, in particular, by Bob Hale and Crispin Wright) supports the view that the correct foundations for (second-order) arithmetic is provided by full second-order logic plus the so- called Hume’s Principle

Nevertheless, there is a long-going debate on the supposed analyticity and/or logicality of HP - see e.g. the main criticisms by Boolos (1987, 1997), especially based on HP’s overwhelming both first- and second-order ontological commit- ments: not only it is required that the first-order domain is inhabitated in order for HP to come out true, but also standard formulations of neo-Logicism quan- tify over second-order entities such as properties, Fregean concepts, or classes. Also, since the neo-Logicist wants HP to deliver the epistemic access to the in- trinsic nature of cardinal numbers, she is also up to her neck with metaphysical commitment, namely she wants HP to deliver the existence of objects of a cer- tain kind. But, at the same time, as for HP providing the epistemic access to the intrinsic nature of cardinal numbers, it seems she doesn’t: though HP delivers all the truths both of the form #F = #G and, more importantly, #F /= #G, it stays silent as for the truth of mixed identity statements such as #F = q where q is not given as a number-term governed by HP. This is the so-called Julius Caesar Problem.

What I am going to claim is that, if the neo-Logicist sets herself for a little less, a case can be made for a neo-Logicist approach to be ontologically innocent as for its second-order fragment; metaphysically innocent as for the first-order fragment, and thus solve the Julius Caesar problem; such that some notion of logicality is gained by HP; and such that PA2 can be recovered as usual. In particular, the ontological innocence of the second-order fragment of HP will be gained by plural logic instead of second-order logic - Boolos (1984, 1985); in order to gain the metaphysical innoncence of the first-order fragment, number-terms will be interpreted as arbitrary names, thus solving the Julius Caesar problem - Breckenridge & Magidor (2012), Boccuni (2013), Boccuni & Woods (unpub.), Martino (2001); and finally, in order to gain some form of logicality to HP, arbitrariness will be connected to some form of invariance under isomorphism - Boccuni & Woods (unpub.), Woods (2014).

This paper focuses on the hypothesis that distinct names denote distinct objects, which was entertained by Russell and Wittgenstein as part of their conception of a logically perfect language. Some foregone objections to this hypothesis will be considered, in order to show that none of them resists scrutiny. As far as we know, no compelling reason has ever been offered against it.